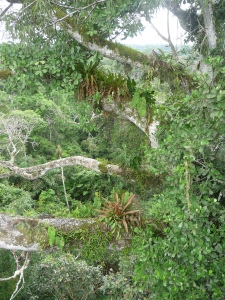 The Ecuadorian government is in the process of auctioning off all the country’s remaining virgin rainforest, 8 million acres, to oil companies. Oil drilling is also planned in the Yasuní National Park, which is not only a UNESCO World Biosphere Reserve and the most ecologically diverse spot on the planet, but home to the last two indigenous tribes in Ecuador living in voluntary isolation.

The repercussions of oil drilling in these areas of pristine rainforest would be environmentally and culturally catastrophic, as has been witnessed in areas of Ecuador’s Amazon already being exploited, where more oil has been spilled than in the Exxon Valdez disaster. Communities who live sustainably and depend on the rainforest and its rivers now live next to toxic waste pits and streams laced with heavy metals, suffering from hugely increased rates of cancer, childhood leukaemia, miscarriage and skin lesions.

The destruction of Ecuador’s Amazon isn’t just a local issue. With global carbon dioxide levels increasing every day, the Amazon’s role as the lungs of the planet becomes ever more vital. Its fate affects us all.

The innocuously titled XI Oil Round is an auction, selling all of Ecuador’s remaining virgin rainforest, 8 million acres, to oil companies. Defying Ecuador’s own 2008 constitution and the wishes of the seven indigenous tribes who live there, the auction of one of the planet’s most bio-diverse regions has already begun. 28th November 2013 was the deadline for oil companies to submit bids for the 13 available oil blocks.

The government map below shows the location of the Amazon basin in Ecuador and the oil blocks in the Northern Ecuadorian Amazon which are already licensed for exploitation, including the Yasuni ITT oil field. 13 blocks (in orange) were open for bidding on 28th November. Three blocks (in green) were pre-assigned to the state-run oil company Petroamazonas. Five blocks (in white) have been temporarily suspended from the auction due to indigenous resistance. 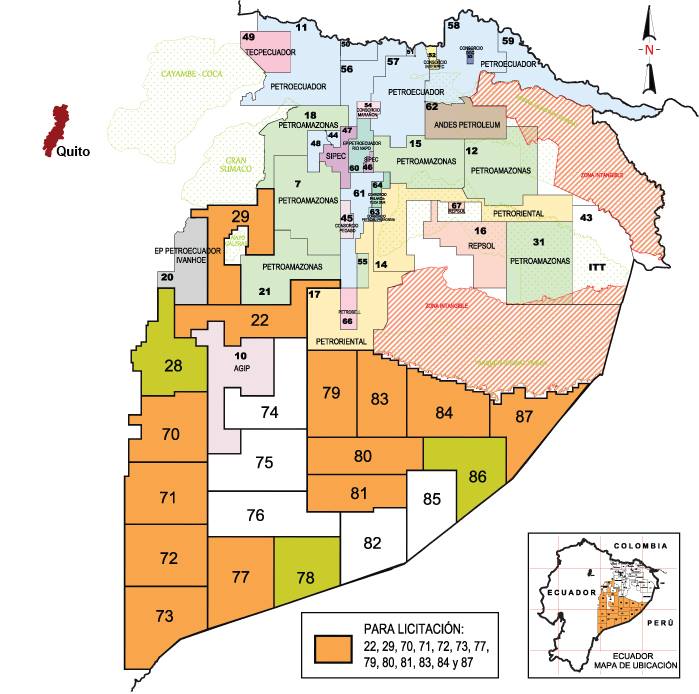 On the submission deadline, only four blocks received bids. A Chinese company, Andes Petroleum Ecuador Ltd, bid for blocks 79 and 83. Repsol, from Spain, bid for block 29. An Ecuador/Chile/Belarus joint venture, Consorcio Petroamazonas, bid for block 28. Winning bids on these four blocks will be announced in March 2014.

Shortly after the four bids were received, the Ecuadorian government announced that the remaining blocks would all be allocated to the national oil company, Petroamazonas, meaning that all of Ecuador’s remaining virgin jungle will soon be exploited.

The Ecuadorian government has promised that exploitation will be undertaken with “environmental and social responsibility”. If this is the case, can the oil be extracted without affecting the tribal peoples’ land and way of life; is there a happy medium? Perhaps a good way to answer this question is to look at areas and communities already living with the effects of oil exploitation in Ecuador. 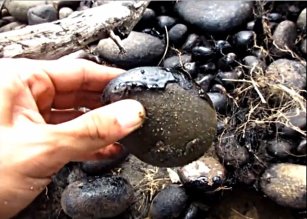 Oil on the river stones near Coca, Ecuador, May 2013

Oil has been extracted for decades in Ecuador’s northern Amazon region, which has been catastrophic for both people and the environment, with major spills occurring as recently as June of last year. Communities who live sustainably and depend on the rainforest and its rivers for survival have been left permanently with no drinking water, unable to wash or fish in the rivers, due to contamination. Because they now live next to toxic waste pits and streams laced with heavy metals, they have hugely increased rates of cancer, childhood leukaemia, miscarriage and skin lesions. Communities who have tried to resist the exploitation of their land have been subjected to brutality by government troops.

Now, the entire southern region of Ecuador’s Amazon, estimated to be 85% virgin rainforest, looks likely to suffer the same fate. 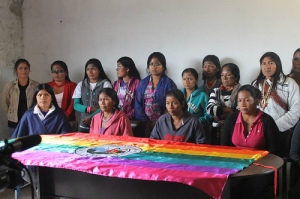 Patricia Gualinga (bottom left) with a group of women who walked across Ecuador to protest about the XI Oil Round (photo 350.org)

The indigenous communities who live in the region have vowed to resist the invasion of oil companies into their ancestral lands. Patricia Gualinga of the Sarayaku tribe, part of whose territory falls within the land bid for by the Chinese oil company Andes Petroleum Ecuador Ltd, had this to say:

“Petro Andes, a Chinese company, has made an offer in the 11th Oil-Licensing Round that affects 6,000 hectares of the sacred territory of Sarayaku, sacred land of our ancestors. From Sarayaku, we once again express our whole-hearted rejection of oil development on our territory. This company will not enter our territory. We will defend it with our lives.”

Yasuní National Park is an area of the Amazon recently found by scientists to be the most bio-diverse on the planet and probably unmatched by any other park in the world for total numbers of plant and animal species. A UNESCO World Biosphere Reserve, Yasuní has more than 1,300 species of animals and 100,000 species of insects. One hectare of its rainforest has as many as 655 tree species; more than all of the US and Canada combined.

The park is also home to indigenous peoples with legally recognised territorial rights (Waorani) and the two last known groups living in voluntary isolation in Ecuador (Tagaeri and Taromenane). These nomadic tribes have no contact with the outside world and very little is known about their way of life.

As part of their Yasuní ITT Initiative, the Ecuadorian government offered to refrain indefinitely from exploiting the oil reserves of the currently untouched Ishpingo-Tambococha-Tiputini (ITT) oil field within the National Park, in exchange for 50% of the value of the reserves, or $3.6 billion over 13 years from the international community. A United Nations Development Programme (UNDP) fund was set up in 2010 to receive contributions. But on 15th August 2013 the President, stating that only $13.3m had been received from foreign nations, signed a decree to liquidate the UNDP fund. Drilling for oil was declared to be in the national interest, a move which threatens 10,000 hectares of virgin jungle within the Yasuní National Park and goes against the constitution, which states:

“The territories of the peoples living in voluntary isolation are an irreducible and intangible ancestral possession and all forms of extractive activities shall be forbidden there. The State shall adopt measures to guarantee their lives, enforce respect for self-determination and the will to remain in isolation and to ensure observance of their rights. The violation of these rights shall constitute a crime of ethnocide, which shall be classified as such by law”.

In fact, the decision to drill in Yasuni National Park is unconstitutional in several ways. As well as violating the rights of uncontacted peoples, the exploitation would also disregard the rights promised to Pachamama (Mother Earth).

One reason for the lack of international donations to the Yasuní fund is that the government’s credibility was undermined when it announced its plans to auction off all the virgin rainforest in the southern Amazon region with the XI Oil Round auction. Indeed, one international NGO described the Yasuní ITT Initiative as “a fig leaf to build political capital while planning for more destruction”.

This view was backed up when the Guardian newspaper published an article revealing that the government was in negotiations with a Chinese oil company to drill in Yasuní even whilst seeking donations from the international community to protect it. 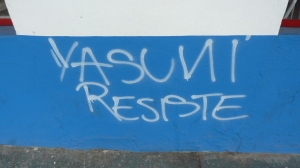 Ecuadorian society at large has mobilized to reject oil drilling in Yasuní and to demand their constitutional right to a public consultation. In response, the government has promised to hold the consultation if civil society presents 600,000 signatures to Congress by mid-April.

It’s a huge challenge, but it may be the only way to save the planet’s most bio-diverse region: recent polls suggest that up to 90% of Ecuadorians would vote to keep Yasuní oil underground, despite a savvy PR campaign from the government. In an advert played regularly on the several state-controlled television channels, the government liken drilling in the national park to a baby getting vaccinated; a small scratch which is painful for a second but goes on to benefit the whole body.

A signature collection by part-time volunteers is already under way. However, the government has set extremely stringent rules about the validity of signatures (e.g. if there is one smudge of dirt on a page, or one person signs in the wrong colour ink, all the signatures on that page are invalid). More volunteer signature collectors are desperately needed.

While drilling in the Ecuadorian Amazon from 1964 to 1990, Texaco – which merged with Chevron in 2001 – deliberately dumped more than 18 billion gallons of toxic wastewater, spilled roughly 17 million gallons of crude oil, and left hazardous waste in hundreds of open pits dug out of the forest floor. To save money, Texaco chose to use environmental practices that were obsolete, did not meet industry standards, and were illegal in Ecuador and the United States.

The result was, and continues to be, one of the worst environmental disasters on the planet. Contamination of soil, groundwater, and surface streams has caused local indigenous people and farmers to suffer a wave of mouth, stomach and uterine cancer, birth defects, and spontaneous miscarriages. Chevron has never cleaned up the mess it inherited, and its oil wastes continue to poison the rainforest ecosystem.

Chevron has been found guilty by Ecuadorian courts and ordered to pay $9.5 billion. The company is now running from an international legal dragnet to force the company to pay for the vast task of cleanup and remediation of the Ecuadorian Amazon jungle. Lawsuits have been filed in Canada and Brazil to seek seizure of Chevron’s assets for this purpose, and more lawsuits in other nations are expected soon.