(Versión en Español aquí). Thus, the following week on 18th December, we found ourselves eating countless bananas on the long bus journey to Quito and half watching the Sylvester Stallone movies dubbed into Spanish which pass as passenger entertainment. As we neared our destination, the banana plantations turned into stunning mountain scenery and finally the glittering lights of Quito.

We arrived at our hostel and confirmed the arrangements for the following day’s meetings. We were delighted when our contact at the NGO suggested we meet at a vegetarian restaurant which C had visited a few months previously and loved. Feeling that this was a good omen for the day to come, we had dinner and went to bed.

The next day was one of the most exciting, nerve wracking, fascinating and exhausting days of my life. I considered the meeting with the contact from the NGO, henceforth known as K, to be possibly the most important meeting of my life so far, so I was feeling jittery as we made our way to the restaurant. The hour which followed turned out to be the biggest turning point of the campaign so far, leading to the creation of this blog.

Fundacíon Pachamama was closed by police on 4th December

First we discussed with K the government’s oppression of NGOs. Just a few days previously, Fundacíon Pachamama, an organisation which had been operating in Ecuador for 16 years, had been shut down by the government, sending shockwaves around the activist community. The Ecuadorian President had accused members of the Fundacíon of attacking a Chilean ambassador at a demonstration against the XI Oil Round auction on 28th November (a partly Chilean consortium having that day submitted a bid for one of the oil blocks). The Fundacíon deny any involvement. The general consensus is that the Fundacíon was dissolved for protesting about the XI Oil Round.

The closure order was issued by the Environment Ministry citing Executive Decree no. 16, issued in June by the President, which essentially forbids social organizations to disagree with the government. The Decree overrides the 2008 Ecuadorian Constitution, which guarantees “the right to voice one’s opinion and express one’s thinking freely and in all of its forms and manifestations” and “the right to practice, keep, change, profess in public or private one’s religion or beliefs and to disseminate them individually or collectively, with the constraints imposed by respect for the rights of others”. The constitution also grants right to nature and states that “Nature, or Pacha Mama, where life is reproduced and occurs, has the right to integral respect for its existence and for the maintenance and regeneration of its life cycles, structure, functions and evolutionary processes. All persons, communities, peoples and nations can call upon public authorities to enforce the rights of nature.” 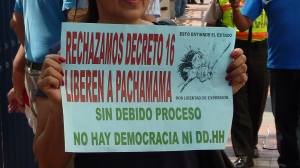 To quote a frightening article by Manuela Picq: “Decree 016 is a bit like a Big Brother of civil society, monitoring [social organisations’] internal functioning and banning them from political life … The controversial decree requires social organizations to register with the state, to meet a specific list of requisites, and publicly justify their budgets to receive legal recognition.  In addition to this administrative surveillance, the decree forbids political partisanship. Social organizations that participate in politics or disrupt the public order automatically become illicit”.

According to the closure order, Fundación Pachamama violated articles 2 and 7 of Decree 16: “Deviation from the aims and objectives for which it was created” and “Engaging in political activities reserved for political parties and movements registered in the National Electoral Council, that affect the public peace or that interfere in public policies that threaten the internal or external security of the state”.

As well as dissolving Fundación Pachamama, the government has launched a smear campaign against them – and other foreign-funded NGOs. Whilst were on the bus to Quito the day before our meetings, the Telegrafo newspaper had printed a piece about NGOs being a “mask that hides imperialism”, propagating Bolivian Vice President Alvaro Garcia Linera’s theory that “NGOs are the vehicle for a kind of colonial environmentalism that relegates the role of the Amazon’s indigenous peoples to forest caretakers, creating a new kind of privatization and denationalization of parks and protected areas …  The Amazon is ours. It doesn’t belong to business, nor to the NGOs which claim to teach us how to protect it”. It also quoted Juliana Botero of the Marcha Patriótica organisation, saying that what NGOs “really want is to get money and endorse policies which are often conservative”.

Government oppression is not restricted to those dissenting exploitation of the Amazon.  Just after our trip to Quito, a student was sentenced to four years in prison for protesting about the government. A couple of days later, Amnesty International issued a statement expressing its concern for activist Carlos Zorilla, after the President accused him of ‘destabilising activities’ and ‘defending foreign interests’ and called on Ecuadorians to react.

K emphasised that now is not the time to stick our heads above the parapet and urged us think strategically; to plan for a long game. He warned against a reckless and pointless sacrifice.

The conversation turned to our two big questions: How can we be most useful in the fight against Big Oil in the Amazon? How can we best support the indigenous peoples who are defending their ancestral lands against the invasion of oil companies?

K considered our strengths and skills. Rather wistfully, he told us that now he has a family, he no longer has the freedom to travel within Ecuador as much as he’d like. He pointed out that our freedom is a major strength and suggested we make the most of it in our campaign. He then came up with the inspired idea of travelling around Ecuador, interviewing people, capturing stories and publishing a series of short videos about life and resistance. The idea would be to amplify the indigenous voice, making our work accessible internationally by adding English subtitles to all our videos. He told us that this was the kind of work which his organisation, and others in the field, just don’t have time to do, but would be very useful. He suggested that perhaps they might even use our videos in their work.

Just as excitingly, he told us that his organisation’s Founder and Programme Director would be in Ecuador in early 2014 and suggested we might like to meet with them. By then they would have worked out their strategy for the coming year and would have a better idea of how we might be able to work together.

C and I were delighted with both proposals and discussed them at length over a delicious lunch in the vegetarian restaurant after K left for a conference call. In the hour he’d spent with us, everything had changed. 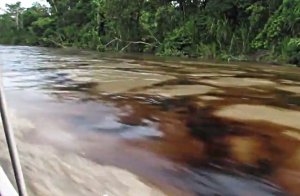 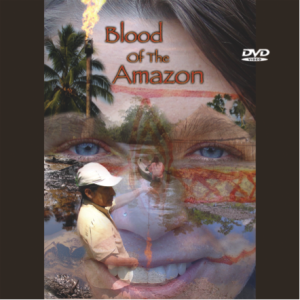 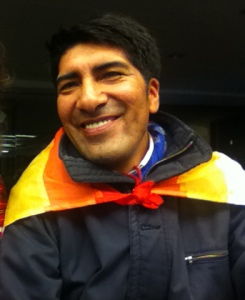 It was a single day in this beautiful city which led to my friend C and me accepting the most exciting challenge of our lives.

We’d made the long journey to Quito to find the answers to the following questions:

How can we be most useful in the fight against Big Oil in the Amazon? How can we best support the indigenous peoples who are defending their ancestral lands against the invasion of oil companies?

Backtracking a little, what was it that led us to undertake a journey such as this; to ask questions such as these?

Our shared interest in the topic stemmed from watching this eye opening low-budget documentary about oil exploitation in the Ecuadorian Amazon.

As I watched this documentary for the first time, I was horrified to see the terrible social and environmental impact of existing oil exploitation in Ecuador’s rainforest. I was also absolutely shocked by the government’s plans to sell all of Ecuador’s remaining virgin jungle, totalling 8 million acres, to oil companies in an auction known as the XI Oil Round. As I discovered the scope of the calamity, I became increasingly determined to spread the word as widely as possible about this enormous environmental crime.

I began by writing articles, one attempting to appeal to a wider audience by comparing the situation in Ecuador to the plot of the movie Avatar.  I sent countless emails to environmental radio stations; local, national and international news outlets; celebrities; and university environmental groups, trying to raise awareness of the XI Oil Round.

The lack of response was such that, at times, it felt like all my messages must be going into recipients’ junk folders. Nevertheless, whenever I felt really discouraged, something would happen to rejuvenate me exactly when I needed it most. At one such moment, Amazon Watch posted one of my articles on their Facebook page, which has 75,000 Facebook followers. At another, a captain of a Greenpeace boat I’d been in contact with, emailing from his boat in the South Pacific, introduced me to the organisation’s Lead Forestry Campaigners with the following words, which brought a tear to my eye:

“When the Earth is beset by bulldozers, drilling-platforms and leaky pipelines and we feel dizzy in the ensuing dust bowl of depravity – we need to put down our maps and look about to track the signs and symbols that are left, to recognise the chance meetings and then to know there is a way out. Above all else we need to recognise the warriors who are making a stand. And so it is that I introduce you to one such person. I do hope you are able to share information or ideas, but also inspiration”.

If being called a warrior by a Greenpeace captain is not incentive to go on, I’m not sure what is.

A major milestone for me was a screening of a film about oil exploitation in the Ecuadorian rainforest called Blood of the Amazon. By a serendipitous stroke of luck, the event was happening during a brief visit to the UK. I ended up speaking at the event and was struck by two things. Firstly, even in that informed crowd, not a single person knew about Ecuador’s impending rainforest auction. Secondly, that a number of people were interested in supporting the indigenous communities resisting the invasion of oil companies into the Amazon. I started to wonder whether my role might be to gather international support for the indigenous resistance, as well as to spread the word about what was happening.

The creator of Blood of the Amazon, environmentalist Nicola Peel, has been working to protect the Ecuadorian Amazon for many years and is involved in some incredible projects, including research into the use of mushrooms to clean up oil pollution (amazingly, 95% effective). I’m a big believer in the universe putting the right people in your path at the right time and so I’d reached out to Nicola before the event and we had a strategy meeting the following day. We discussed plans for gathering support for the indigenous resistance and she subsequently introduced me to some key contacts.

After months of knocking on doors, it was a huge breakthrough when one of Nicola’s contacts responded to one of my emails and I was offered a meeting with a very well respected international organisation with a small presence in Quito.

Carlos Pérez Guartambel, President of ECUARUNARI, the Confederation of Kichwa People of Ecuador

The capital city is a hub of resistance in Ecuador and I wanted to make the most of my time there. Through a mutual friend I set up a meeting with Carlos Pérez Guartambel, leader of Ecuarunari (the Confederation of Kichwa people of Ecuador). Carlos is a long-time activist dedicated to the indigenous resistance and I was star struck at the prospect of meeting him (to understand why, read this wonderful interview, which has been a real source of inspiration to me).

A couple of months previously C had happened to watch  “The Dark Side of the Amazon” on the internet and was so moved by it that we began to discuss what we could do about it. We decided to go to Quito and find out.