(Versíon en Español aqui). We woke up to this beautiful view on the first day of our second trip to Quito. We made our way to the Parque La Carolina for our first interview of the day, with Ecuadorian film maker Manolo Sarmiento, best known for his documentary “La Muerte de Jaime Roldós” (“The Death of Jaime Roldós”). This masterpiece of a film looks at the mysterious death of Jaime Roldós, who was President of Ecuador from 1979 until his death in a plane crash two years later.

Jaime Roldós became known for his firm stance on human rights. In his short tenure, he reduced the workweek to 40 hours, doubled the minimum wage and proposed a Charter of Conduct with Venezuela, Colombia, and Peru, in which the principles of universal justice and human rights were re-affirmed. In an era in which most Latin American countries were military dictatorships, Roldós became a moral compass for the region, antagonising neighbouring military governments and going out of his way to reveal evidence of the “dirty wars” in several countries.

In one widely reported incident at an international summit in Colombia, El Salvador’s Napoleón Duarte (a U.S.-backed dictator) accused Roldós of being young and inexperienced, to which Roldós responded: “I may be inexperienced, but my government perches on a mountain of popular votes, while yours is perched on a mountain of corpses.” 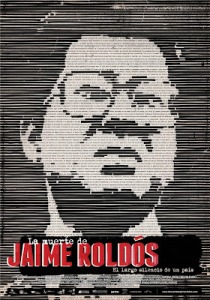 The crash in which Roldós died left no survivors: killed along with the president were the First Lady Martha Bucaram, the Minister of Defense and his wife, as well as two aides and three other passengers.

The American author and activist John Perkins, in his book Confessions of an Economic Hit Man, concludes that Roldós was assassinated by the U.S. government, allegedly by a bomb located in a tape recorder, because his plan to reorganize the oil industry would have threatened U.S. interests. Just months after Roldós died, Panama’s leader Omar Torrijos, who had been at odds with the U.S. over control of the Panama Canal, died in another plane crash, perceived by some to have been a CIA-conducted assassination.

Manolo is a great person to talk to about history, so we also spoke with him about the indigenous uprising of 1990, an event that forever changed the country. After that day of massive actions in cities across the nation, Ecuador’s native peoples could no longer be ignored.

CONAIE (The Confederation of Indigenous Nationalities of Ecuador) organised the uprising with 16 demands, amongst them:

Early in the morning on June 4th 1990, thousands of indigenous Ecuadorians blocked the access routes to the capitals of seven provinces with boulders and trees. They also blocked routes into Quito and cut off travel along the Pan-American highway.

Food supply to the cities was cut off and the country was effectively shut down for a week. The majority of the indigenous actions were peaceful, often including dancing and music, which proved disconcerting to the police forces.

The uprising caused so much disruption to federal commerce and social order that the government relented and met with the leaders of CONAIE. Although the movement did not gain the indigenous peoples much ground in terms of agrarian reform, it shook Ecuador’s white elite power base. “It was because of the uprising that they began to recognise us as people, as human beings, and that we had a voice and we could take action,” commented Norma Mayo of CONAIE.

The uprising also triggered a wave of sympathy among the urban middle class. “I love the indigenous part of me,” was painted on many walls in Quito.

Over the next two decades, CONAIE led a dozen more uprising and mobilisations. Election after election, indigenous Ecuadorians took power in more and more local governments — which had been unthinkable prior to the 1990 uprising.

Today, in 2014, as the government’s extractivist policies threaten the environment and human rights to an ever greater degree, resistance is building.

We asked Manolo about the significance of the 1990 uprising and whether he believes that the current resistance to oil exploitation could lead to a similar event.

We finished by asking Manolo the question which we put to everyone: “How can people all over the world support the struggle to save the Amazon from oil exploitation?”. This is what he had to say: