(Versión en español aqui). Pocho Alvarez is arguably Ecuador’s best known film maker. Specialising in political, social and environmental content, he is one of the country’s most prolific and well respected documentary makers. In his 30-year career he has created more than 50 films.

Probably the best known of these is “Crude” (2009), which documents a 2-year period of the still-ongoing class action lawsuit against Chevron Texaco. The film follows the progress of the plaintiffs, 30,000 indigenous Ecuadorians whose ancestral homeland was polluted in what was, and continues to be, one of the worst environmental disasters on the planet. “Crude” is said to be the most uncomfortable audio visual record which exists for Chevron Texaco, due to the media coverage it received.

The two-minute trailer for “Crude” (in English) can be watched here:

In another documentary, “Toxico Texaco” (2007) Pocho speaks to the communities whose lives have been destroyed by Chevron Texaco’s environmental crime. If you are sitting on the fence about the damage caused by oil exploitation, I would recommend watching “Toxico Texaco”. For me personally, whenever I have an exhausted moment of doubt about the mission I have chosen, I think of the mother and daughter featured in the film, both dying of cancer due to living in a contaminated environment and it spurs me on. “Toxico Texaco” can be watched online (with English subtitles) here.

Following our meeting that morning, Manolo Sarmiento had introduced us over email to Pocho, who had very graciously invited us to his home that evening. We were extremely excited to meet him. As well as being dazzled by his impressive filmography, I knew that Pocho had been personally denounced during one of the President’s weekly public addresses. I was fascinated to know more. 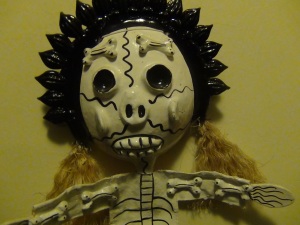 Pocho’s apartment was full of intriguing artefacts from around the world. The man himself was a welcoming host and a dream interviewee, offering us whisky and setting us up with extra lighting and a tripod.

Pocho has made a number of short videos encouraging people to sign the petition for a public consultation on whether to drill for oil in Yasuni National Park, so we started off by asking him why the signature collection is important. We loved what he had to say.

We asked for Pocho’s opinion on the government’s claim that oil exploitation will be conducted with environmental and social responsibility, bringing economic benefit to the people of Ecuador.

We finished with the question we ask everyone: how can people all over the world support the fight against oil exploitation in the Amazon?

We did speak with Pocho about his denouncement by the President and government oppression of activists, but those videos will be published in a future blog entry about resistance against mining. Watch this space!

Before we left, Pocho gave us copies of his DVDs and shared some of his contacts with us, including the email address of one of my heroes, Patricia Gualinga of the Sarayaku tribe. We thoroughly enjoyed our meeting with Pocho, finding him to be outspoken and engaging, with a twinkle in his eye suggesting a constant source of inner mirth.